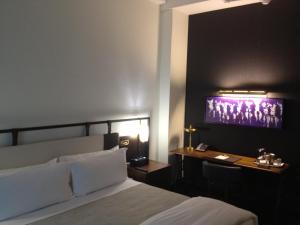 The 197-room Refinery Hotel pays homage to its storied past and the rich history of the 1912 building it occupies. Nestled in the heart of New York City’s Fashion District, the Refinery was designed by Stonehill and Taylor, the same team that worked on the elegant and nearby Nomad Hotel. Rooms have an industrial-era flair, with brushed oak hardwood floors, black and white mosaic-tiled bathrooms and original artwork that nods to the building’s past as a turn-of-the-century hat factory.

The hotel features an English-style pub/Parisian bistro from famed chef Jeffrey Forrest and one of the city’s hottest rooftop bars, which boasts dramatic views of the Empire State Building and the New York skyline. Basic rooms start at 23sqm, but feel large due to the 12ft ceilings and oversize windows. In-room amenities at the Refinery are first-rate, with bath products from New York's own Le Labo, and full bottles of Hudson Whiskey (in some rooms) in the excellent and varied minibar. An early model telephone fits right in at the Refinery

Since its opening in 2013, the Refinery has racked up numerous travel and design awards, and is more than holding its own in New York City's crowded and competitive hotel market. What we liked best about the hotel, however, was its staff, who seemed genuinely happy to be working there.

For a young hotel, the Refinery is doing an amazing job, and we expect continued great things from this Midtown upstart hotel. Typical styling in the rooms (check out those high ceilings!)

Most rooms do not have coffee machines, but that's ok. Right across the street from the hotel is Culture Espresso, one of Midtown's few respected specialty coffee shops. Check with hotel staff about the live jazz and piano line-up in the hotel lobby’s stylish and comfy bar and tea lounge, Winnie’s—named after Ms. Winifred T. MacDonald, who ran a popular tea salon during the prohibition era in the building’s lobby.

Reserve At The Refinery Hotel

Find Another Hotel in New York 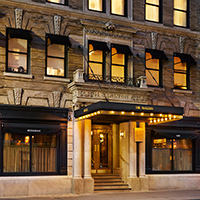 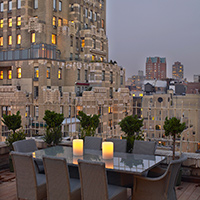 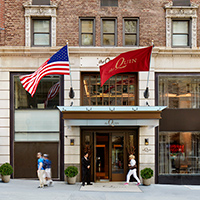